I got it for free as a bonus when I bought Cosmopolitan Indonesia Anniversary issue in September 2012. I had never heard about the product before I bought the issue. So, I had to google it first. There were so many good reviews about this product. I started using this product last month since I ran out of my Olay Natural White All in One Fairness Day Lotion. 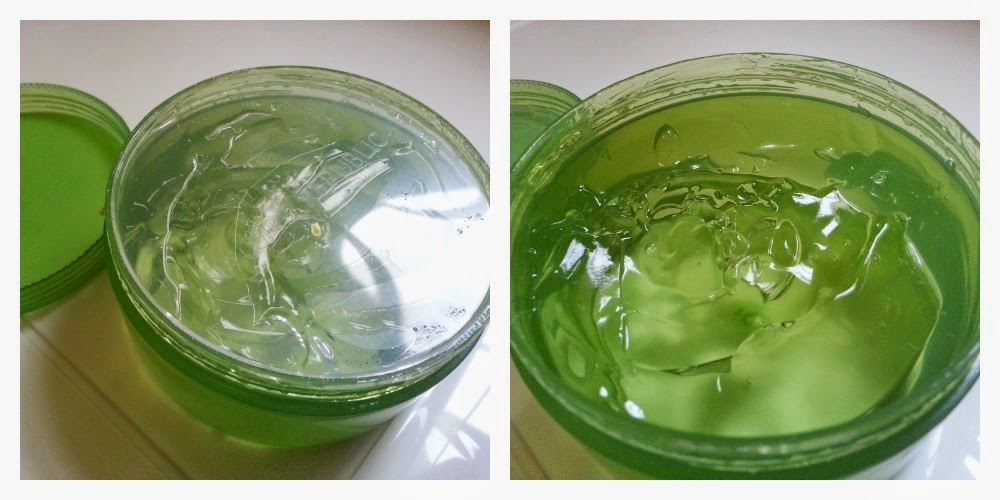 It is packaged in a 300ml green plastic container with a protective inner cap. The texture is a thick transparent gel which melts as it touches your skin. It has a refreshing smell.

Nature Republic Aloe Vera 92% Soothing Gel is said to be multifunction. What do you need? Primer? Moisturizer? Face mask? It comes with an explanation on how to use it. Eight best ways of using it proposed by Nature Republic:

Since the plastic container is quite large, I put some of the gel into a pump bottle so it can be more hygienic and less messy–I tend to drop the gel since it melts very quickly when it touches my skin.

I love how refreshing scent is, and how the light texture quickly melts the moment it has contact with my skin. Since it melts quickly, it feels really light on the skin. It’s quite fast to be absorbed by my skin, and gives a slight fresh sensation to the skin–probably due to the small amount of alcohol in it.

1.   As moisturizer:
It does moisturize my face but does not make it sticky and greasy like other moisturizers I have used before. I have combination skin. I have tried many moisturizers, and all of them always end up making my face greasy and, sometimes, sticky. This product works just great with my skin. It moisturizes my skin but not too much that it makes it sticky. Also, my pores become less visible, and I don’t breakout often. I asked my mom, who has very dry skin, to try it but it didn’t moisturize her face at all. It was just like putting water on your face but with more refreshing effect and better smell.

I also used it as overall body moisturizer, especially on the extremely dry areas like my knees and elbows, it didn’t moisturize them at all. When I put more, it felt sticky.

2.    As face mask:
I tried by applying a considerable amount of this gel on my face before I go to sleep. When I woke up the next morning, my skin felt soft and supple. Pretty good as a sleeping mask. However, do not apply too much product. Apply just a little bit more than you would as a moisturizer but not more than that. If you apply too much, it will be like you're using a peel-off mask that is not dry yet, and it will smear all over you pillows and bolsters, or worse all over your bed. Ewwwww!

3.   As eye pack:
This just didn’t work for me. It did give a bit of refreshing feeling on the skin–probably because of the alcohol–but nothing more. I tried on my puffy eyes–due to heavy crying–for 15 minutes but it didn’t make any difference at all.

4.   As primer or make-up base:
As a primer, I think this gel doesn’t really do much. When we use primer, we want to get this flawless look, right? This gel can’t give that. Also, it can’t give the long-lasting make-up that we usually expect and get by using primer. However, if you just want a natural-looking make-up, I think this will do just fine.

5.   As anti-irritant/anti-inflammatory treatment:
This gel works great to prevent post-shaving and post-facial irritations. Also, it works wonders as sunburn treatment. As it claims, it DOES soothe your skin. However, it will only calm your irritated skin but it will not heal the sunburnt skin.

6.   As hair treatment:
I have straight and very fine hair. I hardly ever use hair gel because it makes my hair flat and limp. I tried this product as a hair gel and it didn’t make my hair flat and limp because it was similar to using water to style my hair. It dries out quickly, and doesn’t hold the hair enough. Thus, I don’t think it’s the best to use if you want to have a well-styled hair.

I actually have been using Aloe Vera for hair treatment since a long time ago. As far as I know, most of Indonesian people use it as a DIY hair treatment. The spiky plant has a thick slimy translucent flesh which is used as hair treatment due to its well-known benefits in making the hair softer and shinier, giving more volume, and boosting hair growth. It has become some kind of a traditional hair treatment here in Indonesia. I've been using aloe vera from my own backyard–yes, I just happen to have aloe vera growing on my backyard–as a hair mask, and it works awesome. Many people say that it helps with hair growth. It's easy to make. Just scrape the flesh, put it on your scalp and hair, massage a bit, leave them for 30 minutes, and wash your hair. Or, you can mix the flesh with egg white (my uncle who has waist-long hair taught me this). Make sure to wash your hair properly. The egg white will be hard to clean. I usually need to shampoo twice.

7.    As nail essence:
I tried this gel as a nail essence when my nails were really dry after I removed the nail polish I used. I tried it for a week but it didn’t show any difference to my nails. My nails were still dry even after a week. It dissolved as soon as it touched my nails and dried very quickly. I don’t think I’d use this as a nail essence.

8.    As a lip moisturizer:
This gel had done nothing but good as a face moisturizer. But what about using it as a lip moisturizer? Well, I thought I’d give it a shot. Result was very unsatisfactory. Why? It didn’t moisturize my lips at all. It, on the other hand, made my lips dry even slightly chapped. NOT to be used on lips!!!

The eight best ways to use this gel are definitely not all working for me. Since I got it free, I will probably buy it if I run out of this gel – unless I come across a better moisturizer than this one in the future. This is the best face moisturizer and instant aloe vera hair mask for me so far.

Have any of you tried Nature Republic's Aloe Vera 92% Soothing Gel for other purposes? Does it work?

[Update December 2013]: I have stopped using this as a moisturizer since November 2013. I don't know if it's just me but I notice that my facial hair is more visible since I use this product, especially on my upper lip. It probably has to do with its benefits of boosting hair growth, probably... not sure though. I still use this as a hair mask for those days when I'm just too lazy to pick fresh aloe vera from my backyard. As a face moisturizer, I've replaced this with Cetaphil.

[Update October 2014]: I've emptied out this product. After last update, I used it for hair mask only. I don't think I'm going to purchase this product.

By Stella Tampi April 17, 2013
I’ve been holding off this review for a really long time. I kept this as a draft for far too long. Sorry! I had acne problems for years and tried so many products but none really helped. In 2011, my acne problem was worse than ever (thanks to Jakarta’s air pollution, stress and lack of sleep). So, I browsed on the internet to find the best skincare for acne-prone oily skin and many reviewers recommended Kiehl’s Blue Herbal collection.
Post a Comment
Show me more!