I’ve been holding off this review for a really long time. I kept this as a draft for far too long. Sorry! I had acne problems for years and tried so many products but none really helped. In 2011, my acne problem was worse than ever (thanks to Jakarta’s air pollution, stress and lack of sleep). So, I browsed on the internet to find the best skincare for acne-prone oily skin and many reviewers recommended Kiehl’s Blue Herbal collection.
Kiehl’s Blue Herbal Collection is a skin care collection targeted for those with oily and acne-prone skin. There are four products in this collection: Blue Herbal Moisturizer, Blue Astringent Herbal Lotion, Blue Herbal Gel Cleanser, and Blue Herbal Spot Treatment.

When I went to Kiehl’s store at SEIBU Grand Indonesia Shopping Town, I already knew what I wanted to get but I wanted to make sure that it was the right product for my skin. So, I took my time asking about lots of different Kiehl’s products. I was being assisted by one of the very helpful and friendly Kiehl’s Customer Representative (KCR). She asked basic questions about my skin and, as I thought, suggested the Blue Herbal Collection. Although the KCR suggested me to try some free samples first before buying the product, I bought the Blue Astringent Herbal Lotion since I already had my eyes on it and the one-hour-long journey (Jakarta’s traffic sucks!) to the mall was going to be a waste of time and energy if I didn’t buy anything. The KCR gave me product samples of Blue Herbal Moisturizer, Blue Herbal Gel Cleanser, and Over-night Biological Peel. She didn’t give me the Blue Herbal Spot Treatment because they didn’t have the sample.

I was immediately in love with this brand since giving free product samples and suggesting to try some before buying were most definitely not a common thing here in Indonesia. So, it really was a good way to promote their products and attract new customers. 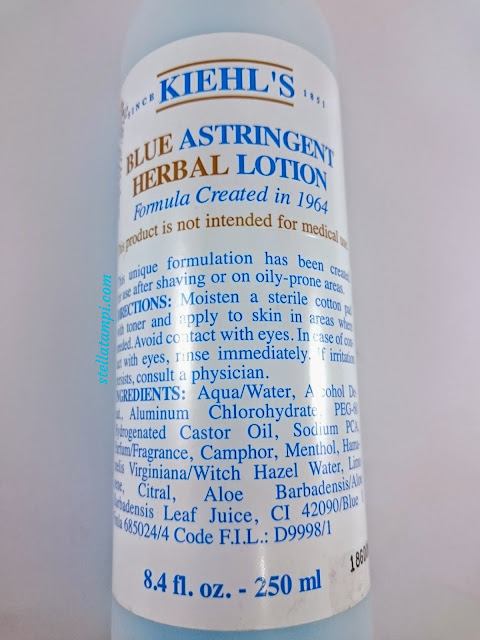 Astringent is similar to toner but with some differences (read more about it here). Just as what I expect from an astringent, the turquoise-colored liquid has a smell of alcohol. On Kiehl's website, it is stated that the key ingredients of this product are Camphor, Menthol and Sodium PCA. Besides using this as an astringent, they stated on their website that male customers use it as an aftershave.

When I apply it to my skin, it gives this cool refreshing feeling but be careful if you have an open wound of a popped pimple because it will definitely sting. The product dries out seconds after it is applied. Then, it makes my skin feel tight and dry. That’s why it is advised to use moisturizer after. This product helps my acne to dry out in a day or two.

Back in 2011 after using it for about a month, my acne was almost completely gone. There were still a few but not as many as before. The scars were disappearing.  Also, I broke out less often. I’ve been using it for two years now. I’m on my second 250 ml bottle and it’s still half full because I don’t use it every day anymore, just when I break out.

My apologies for the lack of pictures. I didn’t document my progress when I started using this product because I had no idea at that time that I would be writing this review.

Will I repurchase it? Yup! It has become my Holy Grail acne treatment.

Does Kiehl’s Blue Astringent Herbal Lotion work for you?

Note: Apparently not all KCRs were as helpful as the one at SEIBU Grand Indonesia. I went to two other Kiehl’s stores: at SOGO Mall Kelapa Gading, Jakarta (it was the closest mall that had Kiehl’s store near my house at that time) and at SOGO Tunjungan Plaza, Surabaya (I moved from Jakarta to Surabaya in late 2012). The KCRs were not as friendly and helpful as the KCR at Kiehl’s SEIBU Grand Indonesia. When I asked to try some samples of the products I was interested in, they immediately said that they did not have the samples and that I should just buy the full-size product. DISAPPOINTED.

[Update May 2013]: I’ve started paying more attention to my skin nowadays. I thought my skin type was very oily and acne-prone. Well, it’s acne-prone but not as bad as I thought and it’s combination not oily. I will tell you about it later. Okay so after the big revelation about my skin type, I’ve been taking care of it. Back when I first started using this product, I wasn’t using any kind of skincare because my skin would feel greasy and sticky. However, now that I start using skincare, it is really annoying to find that anything that goes after this product will roll up and peel. Remember when you exfoliate, and your dead skin roll up and peel? Yup, exactly like that. Yuck! So, I don’t use this product if I will be using anything after. I thought it was only the moisturizer.

[Update February 2014]: Remember when I said that I never used this product if I would be using make-up because everything that came after this product would just roll up and peel? So, I’m still using this product during my hormonal breakout but now, after applying the astringent and letting it dry out, I then spray my Avène Spring Thermal Water, and pat it dry. It solves the problem. :)

[Update March 2014]: My cousin, who just hit puberty, has been having worse acne problems than I used to have. His dermatologist said his acne was genetic. He had been using some creams his dermatologist gave him but he said that they felt really greasy and didn’t seem to help much. So, when he paid me a visit last month, I recommended this product to him because it worked for me. He’s been using the product for a month now and it actually works! The acnes don’t completely disappear since it’s genetic. However, they dry out faster than before, and he also breaks out less often.

By Stella Tampi April 02, 2013
I got it for free as a bonus when I bought Cosmopolitan Indonesia Anniversary issue in September 2012. I had never heard about the product before I bought the issue. So, I had to google it first. There were so many good reviews about this product. I started using this product last month since I ran out of my Olay Natural White All in One Fairness Day Lotion.